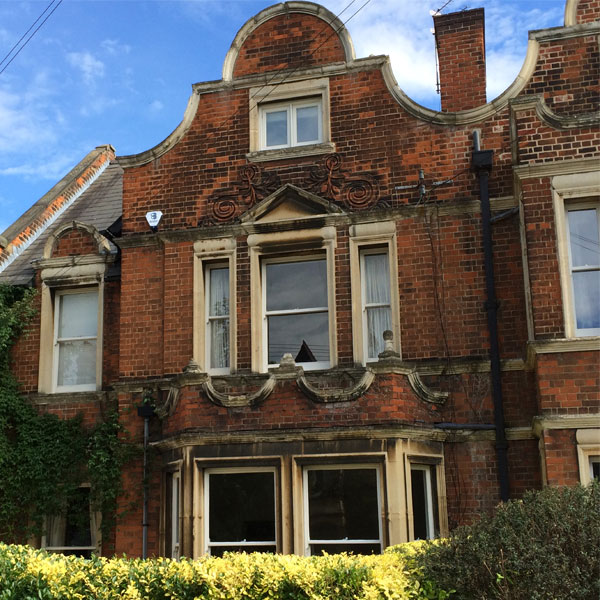 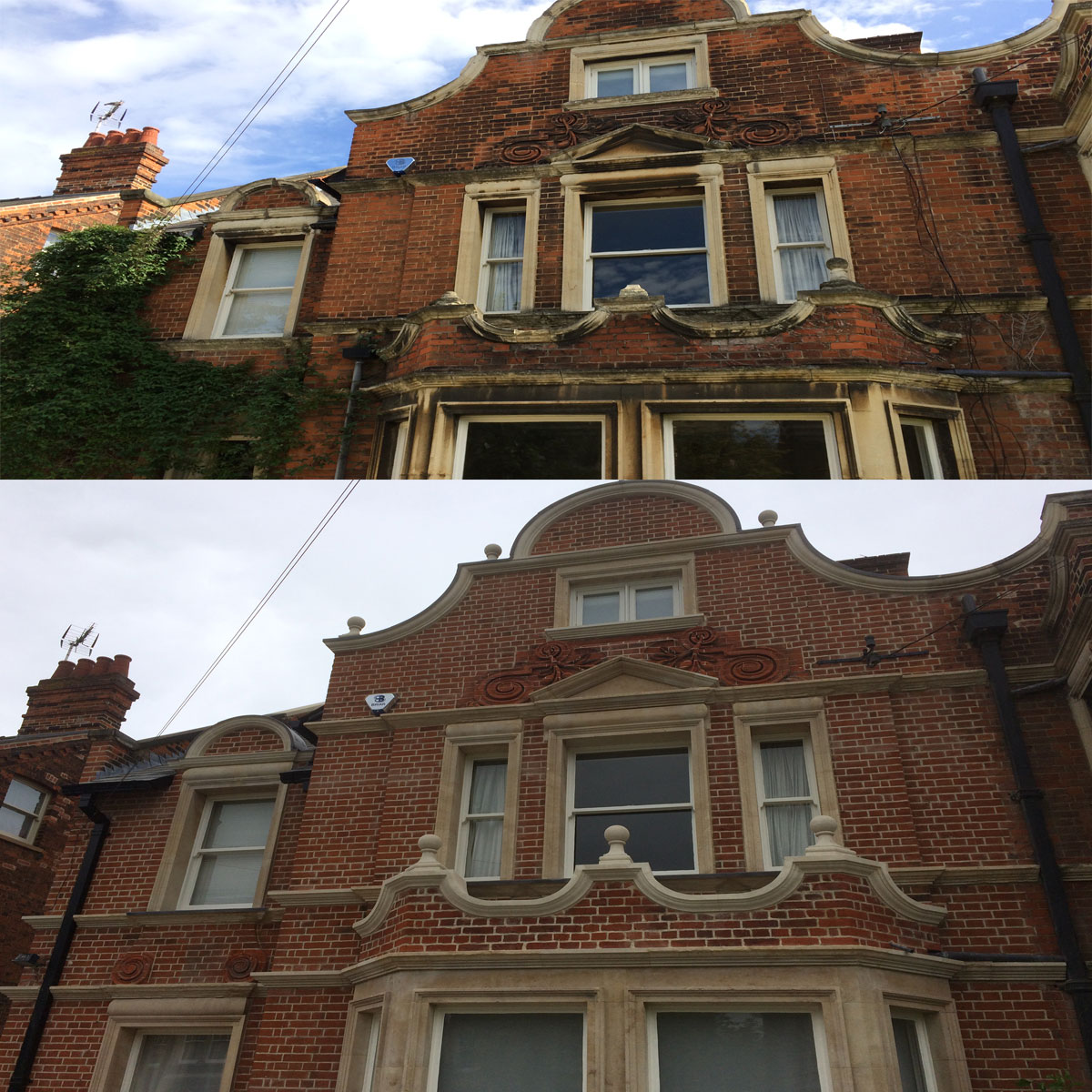 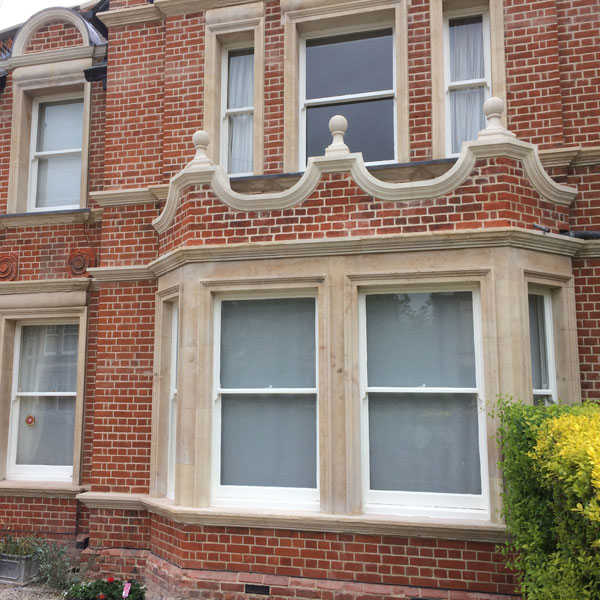 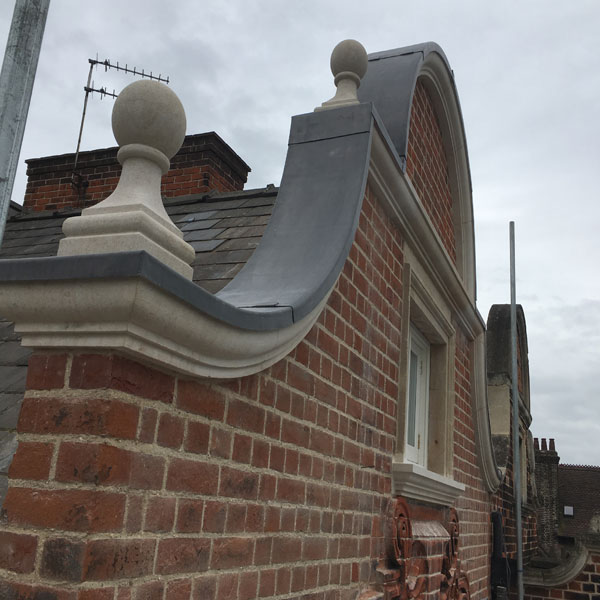 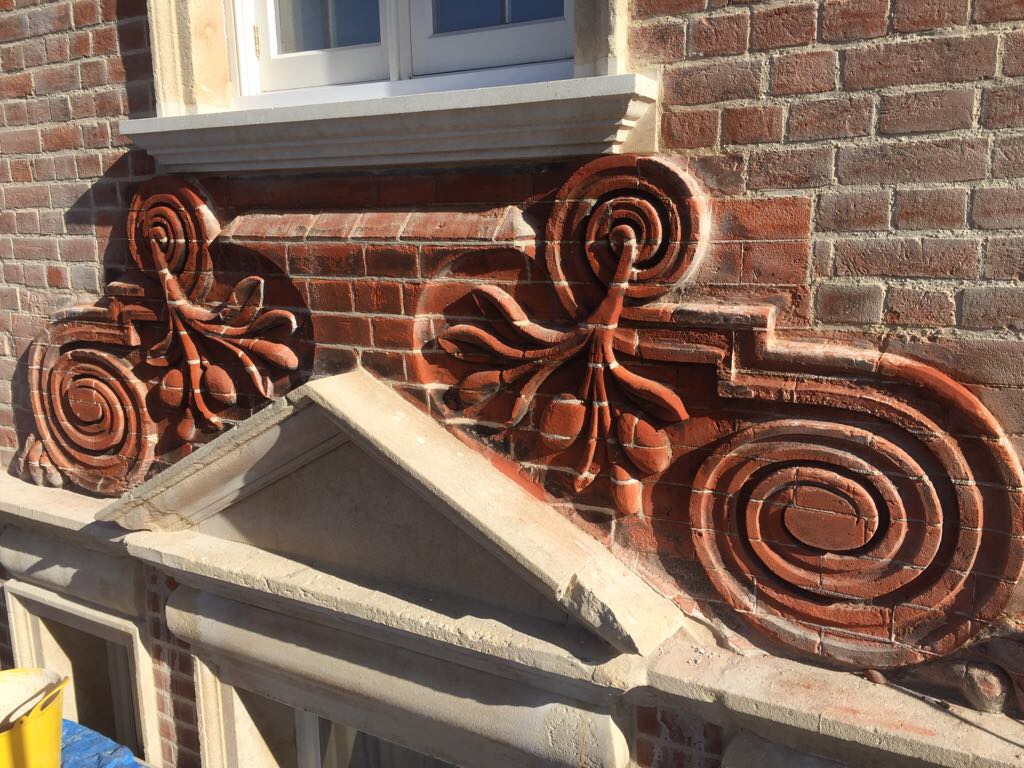 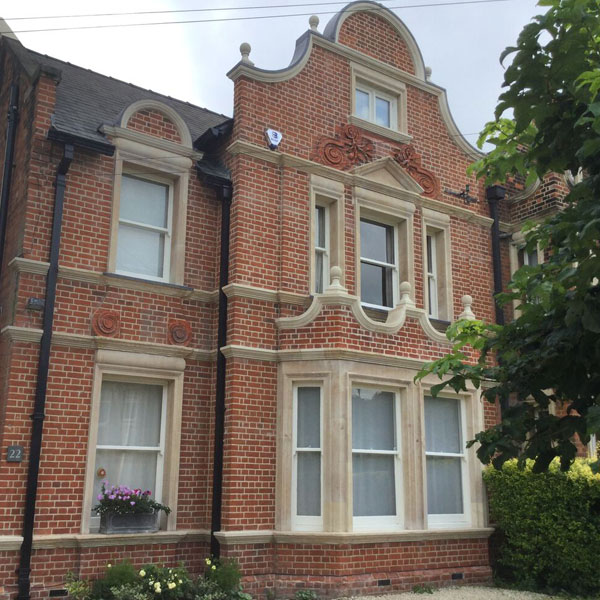 This stunning property in Cambridge, like many in the city, had lost some of its original aesthetic impact due to general decay, bad previous repairs and sacrifices its facade had made due to the poor implication of services during conversion work in the buildings past use as a multiple room let property.
The client contacted us to discuss a programme of repair for the front elevation. From the subsequent meetings it was clear that they wanted to try and keep as much of the original fabric as possible, this conservation approach to repair is what we try to promote in all our work on historic buildings. Their commitment to this approach and belief in our directly employed workforce, served to enthuse us all to deliver the end result this building deserved.

Firstly the whole front facade was lightly DOFF cleaned to remove the surface carbon deposit and allow us to see exactly what repairs would be required. The stonework had generally lost its original moulded detailing but was still in a good structural state, however it was decided that the coping stones were in an unsalvageable condition so these were completely replaced. We managed to find enough detail on the original stone to replicate the original mouldings, these were then cut and worked in our workshops on Victoria Road and dressed in lead to prolong its serviceable life. The missing ornate finials were also reinstated. Old unused service pipes were removed and the missing string course stones and brickwork were made and fitted. The rest of the string course stonework was de-frassed and made good with lime mortars and then Nano-particle sized, super-hydrophobicity was applied to all conserved surfaces.
The bay window had suffered from some historic movement and the parapet was in a particularly bad state of repair, therefore we partially dismantled the bay window and rebuilt it upright with new Bath Stone copings and finials.

The original Brickwork, which is of very high quality had been spoilt by bad previous brick repointing in various isolated locations. The decision was taken early on in the project that old jointing on the whole front facade would be carefully raked out and repointed in lime mortar. We have also replaced over 130 badly eroded and we have also replaced over 130 badly eroded and de-faced bricks in isolated areas with new handmade bricks to match the orignal. Two decorative carved brick panelled areas that were once spoiled by heavy carbon deposits have now been carefully cleaned and conserved with colour matched lime mortars. This has revealed detail that was previously hidden.

We think the end result is nothing less than this stunning property deserved! 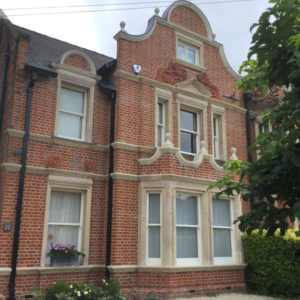